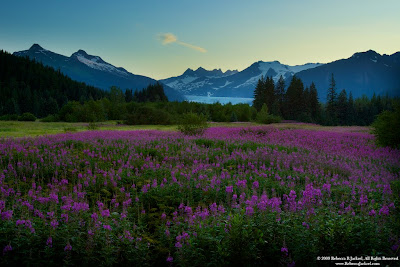 On my first ever trip to Alaska, the trip that ignited my passion for photography, I saw a photograph of the Mendenhall Glacier with a beautiful field of fire weed in front of it. Though I don't remember the photographer, the image has stuck with me. On every visit I've made back to the spot, the fire weed has either not yet bloomed, past bloomed or flattened by rain until this past July (2009). I had a 20 minute stop between a float plane from McNeil River and my Alaska Airline flight home. There was no time to pull out neutral density filters or find where my tripod was buried in my luggage but I made a mad dash to the site to check and while the field wasn't quite as lush as I wanted, I captured an image I enjoy. This image reminds me to take a chance, keep checking every chance you get and maybe that mad dash will pay off.
Posted by Rebecca Jackrel at 5:32 PM 4 comments: 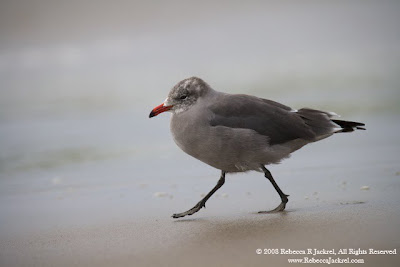 My first pay-off from my culling efforts! It took me 15 minutes to pull images for a recent magazine photo want list. I couldn't believe how much easier it was!! A few well placed keywords and there I had the perfect images all ready to output and send to my editor. There was no digging through endless folders looking for a half-remembered image that MIGHT fit the call. No looking back and forth between 5 different images wondering which was sharper and no searching through agencies to see if the images selected were exclusive elsewhere.

Editing my library is a huge task and it's taking a lot of time and effort. Aside from a bit of hand and eye fatigue, I am making great progress. It's also a bit of a walk down memory lane and I'm finding images I forgot I took like this one of the San Francisco skyline at dawn from Mt Tam. With my library cleaned up I'll be able to easily find all of my images so there won't be any more lost children. Images like this remind me why I am working so hard.
Posted by Rebecca Jackrel at 4:36 PM No comments: 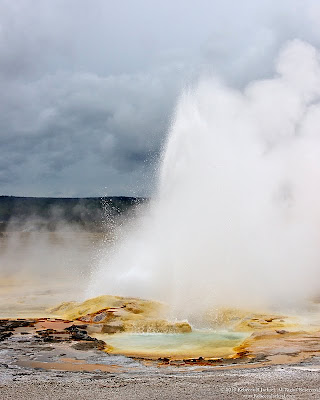 I've finally finished the edits of my Montana work and thought I'd share a quick image. During a large portion of the trip it rained but in my editing I found that I did in fact make the most of the time between the rain drops and at least when it comes to bacteria... the rain makes things beautifully saturated.
Posted by Rebecca Jackrel at 12:17 AM No comments:

Film was easy. You took 36 images at a time. Roll after roll of course but it was all broken down into neat little packages and if it wasn't perfect then away it went, never to be seen again.

Then along came digital. Image after image, a healthy portion of them crap but hey... 'I might be able to make something out of that someday!'. Many 'somedays' later I've finally gotten to the point where enough is enough. Something has to be done to cull this ever growing weed of images. I hadn't realized there were so many. A few tucked on a hard drive here, folders on the desktop, a few on my laptop, there another external hard drive... It seems harmless until you add it up. Then suddenly I realized I am one step removed from those 'Collectors' you see in the news. Granted, digital images can't fall over and kill your cat like multiple floor to ceiling stacks of magazines, newspapers and phonebooks but the sheer volume is the same.

I'm going to start with my most recent work and cull mercilessly while my friend Enrique starts with my oldest work and we meet somewhere in the middle. I'm not sure which of us has the harder job. I shoot far fewer frames now than I did in 2005 but the quality has improved dramatically. So while I will agonize over which slightly different head turn makes the bear look perfect, Enrique will be wondering what the heck I was thinking when I took 275 poorly composed shots of a mallard duck.

The lesson: Edit Early. Edit mercilessly. Edit often. Have great friends to sucker into helping you!