The one thing you can always count on in nature photography is that your subject won't care if they give you the wrong angle for the light.  We found this bear on a recent seal kill but the sun was shining from behind him but not far enough behind him to work with rim light.  We couldn't safely get on shore and move to a better angle so instead, I just choose to go in tight. 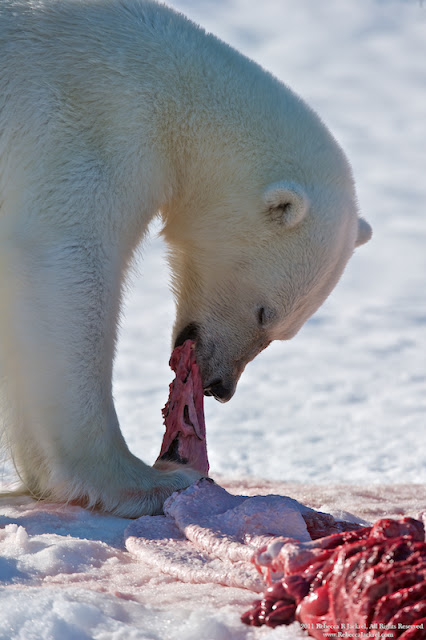 Posted by Rebecca Jackrel at 2:53 PM No comments: 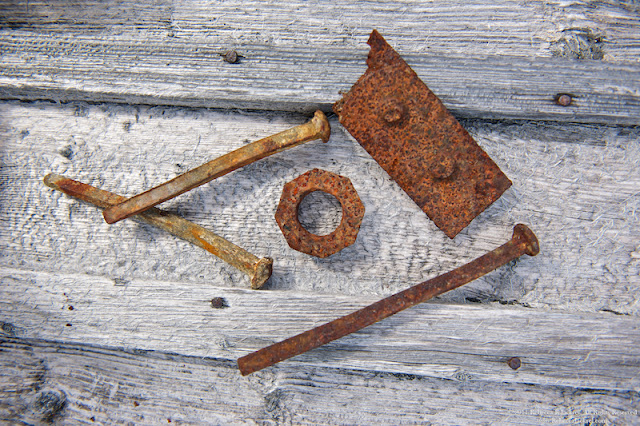 I am my mother’s daughter.  As I scoured the trapper’s camp for good angles on the long abandon rowboats and food cashes, I suddenly found myself drawn to the midden heap.  Ok, it was really the dump or garbage pile but midden heap sounds much more historical and less icky so I’m sticking with it.  I was reminded of walks through the woods with my mother, finding little cabins long abandon and searching for hidden treasures.  A maple syrup tap was one of our greatest finds and I can still see it held high in my mother’s triumphant hand today. 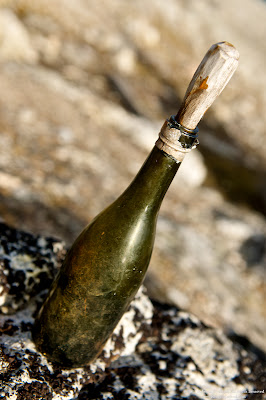 I held up a rusted key from a tin of sardines, square nails, a rusted fork and a wine bottle with a hand carved stopper.  I can just imagine the trapper on a cold winter night, carving that stopper after his sardine meal.  Saving the last bit of wine for another night.  No Internet, no TV, no Twitter or Facebook.  Just a man and the elements.
Unlike my mother, and after hearing the sage words from Paul, “You can’t steal history”, I left my pile of treasures where I found them.  As an historic site I’m certain it will see many more visitors over the years.  You never know, there might be someone else who likes garbage as much as I do and these items will be there for them to explore.
Posted by Rebecca Jackrel at 5:05 PM No comments:

I'll get back to Svalbard next week but wanted to share a couple of shots from a quick field outing with biologist, Caitlin Nilsen of the San Francisco Bay Bird Observatory.  Caitlin is the Waterbird Director with the SFBBO and monitors the bay area population of snowy plovers.

This morning I dragged Jaymi Heimbuch, a talented writer for TreeHugger (Twitter: @JaymiHeimbuch), away from her warm bed at an ungodly hour to accompany me to the plover breeding grounds near Hayward, California.  We caught up with Caitlin and headed into the restricted reserve in search of a nesting site she suspected might be ready to hatch.  When we arrived the first of three speckled eggs had already been breached.  The resulting chick was snuggling the remaining two eggs.  Plover chicks are mobile and able to feed themselves very shortly after hatching.  Once they are on their feet they are nearly impossible to catch.  However, this one needed a little more time to dry off, warm up with mom and gain a bit more strength before we could safely give it some "birdie bling" and so we backed away and Caitlin treated us to a tour of the reserve while we waited, complete with an overview of the restoration project.

After two hours we returned to the nest and found the chick looking fully twice it's hatching size.  He now resembled a cute little cotton-ball.  While Caitlin carefully placed the color-coded bands on the chick, Jaymi and I were delighted to witness the second sibling break from of it's egg.  Caitlin and her team receive a limited number of unique band sequences per season so only one chick from this nest will receive the bands.


To learn more about the Snowy Plover Recovery Project, including ways you can help and where to report sightings of banded plovers, please visit http://www.SFBBO.org.


Posted by Rebecca Jackrel at 3:35 PM No comments:

Getting the Shot in the Field

It was late in the night with a strong wind kicking up when we pulled into the tiny protected harbor.  Through the fog and rain we could just make out the trappers cabin and abandon boats on shore.  We were headed back to Longyearbyen and so we knew that if the weather broke we would have only a short while on land in this location that was rich with photographic subjects. I packed my bag that night, trading out long lenses for shorter wide-angles, a flash, my filters and other accessories.
Early that morning the weather broke and gave us some dramatic storm light on the scene so we sprang into action.  Meg, Paul, Steve and I headed to shore and split in different directions, pulled by our differing perspectives.

I found myself drawn to this old oil drum that had been cut open and apparently used to catch fresh rain water.  It was in the shade of the hut and the sky was bright, a straight shot wasn't going to cut it.  Sure, I could shoot for the middle of this scene and spend hours dodging and burning in Photoshop to "fix" it or I could shoot multiple exposures and blend them but who wants to spend all that time in front of the computer?

Instead I pulled out my flash and set it up off-camera to the far left of the scene to illuminate the face of the barrel.  I then pulled out my trusty Singh-Ray filters and choose my soft edge, 2-stop graduated ND to hold back the light from the sky putting my flashed foreground in balance with the sunlit scene in the background.

We only had an hour in a location where I could have spent days, but I made the most of my time here simply because I was prepared to take advantage of the opportunities.  A few moments of planning the night before and knowing what equipment to use allowed me to capture the image I wanted in less than two minutes set-up time and saved me headache and frustration at home on the computer.
Posted by Rebecca Jackrel at 1:52 PM No comments:


Two years ago a fin whale died and washed up near Holmiabukta.  It's rumored that a film crew dragged the carcass to it's final resting place inside the cove which is a favorite anchorage for small boats seeking refuge from stormy weather.


For the past two years this whale has attracted polar bears from far and wide.  We arrived in Holmiabukta Cove after the thaw while there was still snow on the ground.  We were treated to multiple bear cycling through, diving for the remaining tidbits of meat and blubber. It was such a treat to see so many healthy, well fed bear.  From the death of one whale comes a whole lot of good living for many polar bear.

Posted by Rebecca Jackrel at 9:00 AM No comments:

The 4-stroke engine of the zodiac purrs quietly as we glide through the crystal clear waters of the protected fjord.  The temperature is dropping and I can hear the grease ice crunching against the hull, tiny chips skid away from the skiff as we cut a 3-foot wide swath.  Paul remarks “Who needs bread crumbs?!’ and indeed, the trail is very clear.  5 hours of driving the ice edge has yielded no bears even though we did find many sets of tracks.  The bearded seals are all on high alert, bolting into the water even before we get within a half-mile.  Skunked.  At least we know hot soup and cocoa are waiting for us on the boat when we return… where did we leave the boat again?

Posted by Rebecca Jackrel at 9:00 AM No comments: 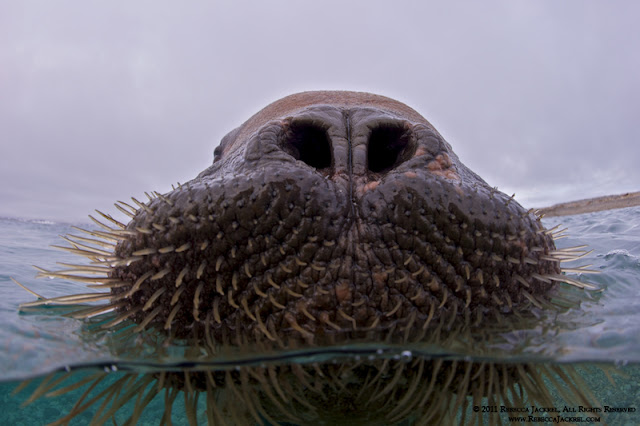 "I must be crazy!!"
The thought passes quickly through my mind as a giant mouth closes around my camera dome port. This walrus is curious, rubbing his vibrissa against my camera as if to say ‘Let me spruce up for my close up’! Two of his friends become interested and tentatively push forward behind him. 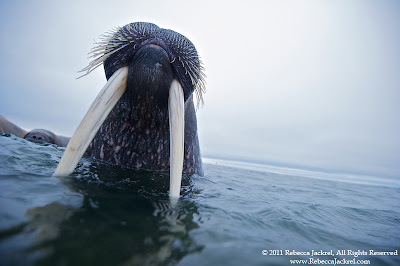 At 1-2 tons, these sweet creatures can do some major damage so I’m glad that I’ve intrigued and not irritated these giants. I glance off to my left and see the guys are not so lucky. They’ve got a large amorous male who sees them as a threat to the female he is wooing. He charges, flashing his long white tusks and snorting and the guys head for the hills, deciding the better part of valor is to let him have his stretch of beach. 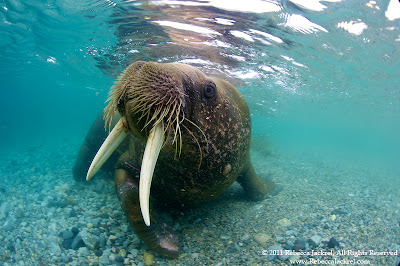 We are in survival suits, which protect against the 4 deg C water but offer little protection from a large angry walrus. I trip on a rock and quick as a wink find myself floating on my back, feet in the air, completely turtled. The suit is extremely buoyant and I fight to get my feet under me again. Advice comes from shore, ‘Just put your feet down, stand up!’ Easier said than done and revenge comes later when Paul trips and finds out for himself how well these suits float.

Posted by Rebecca Jackrel at 11:55 AM No comments: