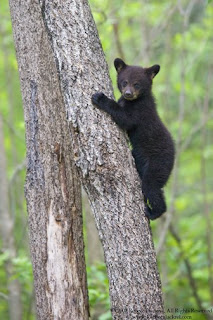 I realized today that it's been a little while since I've had anything to write about here. It hasn't been for lack of work - I have been furiously keywording, sorting and cataloging images from the past three years in an effort to get a handle on my growing library. It's a long and involved process which wouldn't be nearly so hard had I started years ago. So now it is catch-up time and when better than during the summer down time when the animals are looking scruffy and are being more elusive? I have found it much more easy to part with fuzzy, out of focus shots now than ever before. I am viciously throwing away bad shot after bad shot. In the process I am finding forgotten gems like the cute Black Bear spring cub I shot in Minnesota last year.

I'll be back with more images at the end of August when I go chasing after Kodiak Brown Bears.
Posted by Rebecca Jackrel at 6:38 PM No comments: