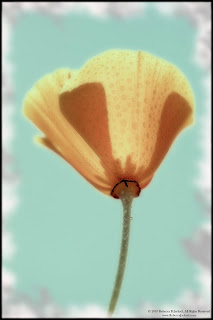 Carol Leigh, a photographer based in Oregon, has run and maintained the "California Wildflower Hotsheet" since 1996. The hotsheet was a goldmine of information about where and when to see wildflowers at their best. Whether you were looking for fields of California Poppies or sightings of the delicate Calypso Orchid, Carol had the scoop and gleefully and generously shared the information with the world.

Unfortunately, the world can be rough, inconsiderate and rude without even knowing it. Carol has made the decision to discontinue the hotsheet due to the poor behavior of a few who have disrespected boundaries of private property, trampled fields of wildflowers and even perpetrated vandalism. I definitely feel for her, it had to be a hard decision. What can be more romantic than a picnic lunch on a blanket in a field of wildflowers? How much can one blanket hurt? Or two? With an audience of the entire world wide web the numbers increase. How about two hundred blankets a weekend? Each with running children and dogs digging holes...

People just don't seem to look beyond themselves and their own desires these days. I was reminded of this on my trip to Death Valley. A car parked on the side of the road on top of a large growth of purple flowers when not 50 feet ahead was a barren turn off. The Racetrack area has become more accessible with a good grading of the track. The first year I visited the Racetrack and the amazing moving rocks the track was bumpy and broken... even washed out in places. I carried a tire pump and two kinds of patch and made certain we had two vehicles in tandem in case we got into trouble. We ran into a handful of other visitors all with high clearance 4-wheel drives. This time, there were dozens of cars traveling in around the clock. Most completely ignorant of the risk of flat tire from the sharp rocks and even more who had no idea of off-road etiquette. Broken glass litters the campsite past the Racetrack. Tents were pitched in no-pitch areas along the road with cars pulled alongside making it difficult to pass and even more distressing were the number of foot prints etched into the lake bed surface and rocks taken from their trails. 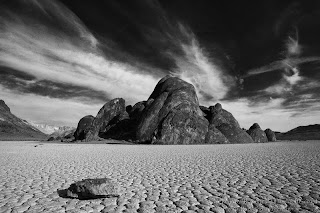 These places can and will heal if we give them a chance but too much love, too much excitement and a desire not to miss out can smother flowers, places and people... we need to learn to walk softly again. To take only pictures and leave NO footprints so that those who come behind us can experience the same grandeur.

**Update:
Ron Niebrugge To Share or Not to Share
Jim Goldstein Hotsheet in the Hot Seat
Posted by Rebecca Jackrel at 11:22 AM 4 comments:

Off to Death Valley

Packing up the car and heading out of town with some good friends in tow! I'm so excited to get out there and camp... get some dirt under my fingernails and some photos with my newly reconfigured gear. Every time I'm in the desert I come away with something completely different and I am hoping for some exciting new images out of this trip. Last time we had some pretty amazing skies as you can see from the pano of Zabriskie Point. Who knows what we'll find next...
Posted by Rebecca Jackrel at 11:15 AM No comments:

The Magic Number for Manatees: 68 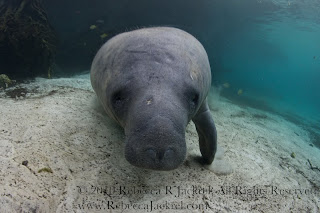 The Florida Manatee (Trichechus manatus latirostris) is a sub-subspecies of the West Indian Manatee that is found in lakes, rivers, estuaries, springs, lagoons... well basically any water source that is more than 3 feet deep in Florida. Fresh, brackish or salt makes no matter to them.

Like any good Floridian, what the Florida Manatee DOES care about is the temperature. If the water drops 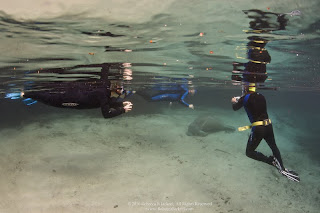 below a cool 68 degrees Fahrenheit they head for the nearest spring or power plant to warm up. This year has been especially hard on the manatees in Florida with over 219 deaths from the cold. Manatee cold-stress syndrome involves metabolic, nutritional, and immunologic factors. Symptoms may include weight loss, skin lesions or abscesses, internal fat loss, dehydration, constipation and other gastrointestinal disorders, internal abscesses, and other secondary infections.*1

The IUCN Red List categorizes the Florida Manatee as 'Endangered' *2 due to a population of less than 2,500 animals and an anticipated decline of 20% in the next two generations. As such, the manatee is under the protection by the 'Endangered Species Act of 1973, the Marine Mammal Protection Act of 1972 and the Florida Manatee Sanctuary act of 1978. These laws state that "It is unlawful for any person, at any time, intentionally 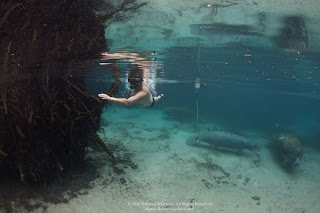 or negligently, to annoy, molest, harass or disturb any manatee". These regulations are pretty clear to me... if you cause a change in a manatee's behavior, you are in violation of the law. So you can imagine my surprise when my friends and I were told by law enforcement, that a man who caused a manatee stampede wasn't actually violating any laws. Excuse me?

In the two days that my friends and I visited the Three Sisters Spring in Crystal River (critical manatee habitat) we witnessed many wonderful manatee/human interactions. Volunteers in kayaks were educating visitors, gently reminding them to avoid splashing and squealing loudly with delight (something that even I found hard not to do when these adorable creatures looked me in the eye). People were swimming calmly and quietly, viewing the manatees sleeping and resting and doing basically what manatees do. There were a few bumps, a few timid pats and strokes mostly initiated by the manatees themselves (still not kosher per the law but seemingly without causing harm to the 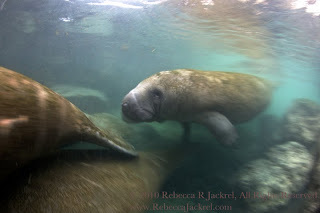 animals) until the second morning we arrived at the spring.

As I entered the channel that leads to the spring I was greeted by a wall of fast moving, panicked manatee flesh. If you have ever had the pleasure of experiencing the company of a manatee you know they are ponderous, deliberate and slow moving creatures. They conserve their energy. This was a mass exodus of terrified animals. There were well over 50 manatees pushing through the narrow channel, bumping into each other and the rocks, pushing past with such force I was bowled over - a less confident swimmer might have had trouble with the situation. When I was able to join my friends inside the spring I found out what spooked the animals. One man. Swimming freestyle. Splashing his arms and kicking hard, his fins slapping the water loudly. He circled the small pools where the manatees were sleeping in aggressive, fast circles causing the poor creatures to startle out of their slumber. When this man was approached and told he was disturbing the manatees he became very confrontational, screaming that my friend had no authority to tell him what he could do, he was entitled to swim any way he pleased! He swims like this "three times a week. Yeah, they get upset and then they calm back down. It's no big deal." Well, actually, it is a big deal ESPECIALLY during a cold snap when the manatees are already under great stress. It's AGAINST the LAW and the law is there to PROTECT the health and welfare of an animal. Two officers were called to the scene and while the Fish and Wildlife officer agreed that what the man was doing constituted harassment, the peace officer did not and no citation was issued. 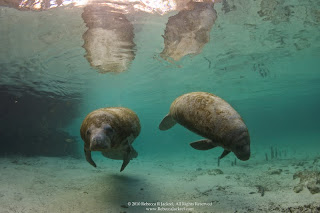 I was and still am astounded. I just wish I had been able to video tape the manatee's reaction so I could show exactly what happened. By the time we realized what was going on and that he was intentionally disturbing the manatee and was refusing to stop, the majority of animals had left the spring and knowing that our video camera was following him, he toned his swimming down so it wouldn't look so bad. If you happen to be in the area and witness this guy... do NOT confront him - he's looking for a fight and is very aggressive - if you can, take some footage and report him to the Fish and Wildlife Conservation Commission (phone number is listed below). The only thing that will stop him is a cold, hard fine from someone in authority. A comment on an image I posted to Flickr struck me as cutting right to the heart of the matter "Unfortunately, we seem to have a never ending supply of people who don't understand their rights stem from the obligation to use those rights responsibly." I saw joy, respect, caring and excitement from so may visitors during my time at the Springs... it's too bad that it only takes one irresponsible person to cause so much grief for one endangered creature.

For more information and ways you can help the Florida Manatee check out the links below: 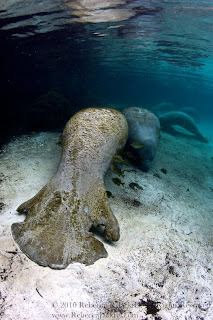