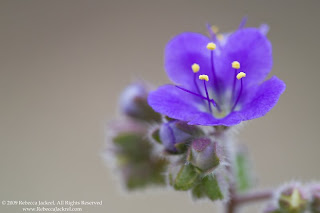 So the last entry before my laptop deserted me was Joshua Tree... from there we left California behind and headed East into Arizona. A brief stop on my favorite road outside Quartzite yielded

some belly crawlers... tiny wildflowers you need to crawl on your belly to see. It also yielded some cholla spines in my belly which weren't nearly as nice as the flowers I found. The Ocotillo weren't blooming but they showed the results of the recent rains by sporting their ovate leaves.

After careful extraction of the cholla spines we attempted

to bee-line to Saguaro National Park and of course got side tracked along the way. We found the Painted Rock Petroglyph Site which boasts approximately 800 examples of glyphs from the Hohokam Culture. The area, 18 miles West of Gila Bend, is well preserved despite the fact that it also has a camp ground and receives many visitors each season. I think the presence of a "camp manager" has quite a bit to do with it. The only restrictions placed on us were quite obvious to us... Don't climb on the rocks, don't try to

take any of the rocks and please don't try to add to the glyphs... other than that, ENJOY! I had thought we would stop in for half and hour just to check it out... after 2 hours I had to call it or we wouldn't make it to Saguaro before sunset! Even though were were behind schedule I couldn't resist exploring some of the dirt roads in the surrounding area. I have a suspicion that examining some of the rock formations around the old river bed would yeild even more glyphs. I'm looking forward to heading out to this area again sometime in the future and spending more time on foot. I need to get some BLM maps I guess. I'm never certain what areas are private lands and which are accessible to the general public. Next time! 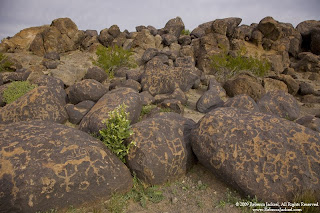 Posted by Rebecca Jackrel at 6:26 AM No comments:

Posted by Rebecca Jackrel at 7:56 PM No comments:

Today was supposed to be my first day with my new MacBook Pro... I am very excited about making the change from Windows to Mac... Unfortunatly it was not meant to be. As I checked the FedEx tracking number I came across an 'exception'. A carrier issue beyond their control. Apple tells me they will get a replacement on the road to me ASAP... So maybe Monday or... April 1st. I can only hope it's sooner than later. I miss having a laptop!!
Posted by Rebecca Jackrel at 7:46 PM No comments: 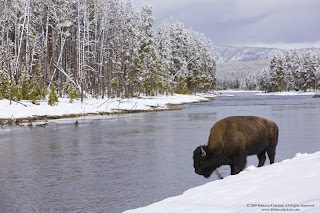 far behind in updating this blog so the next few entries are going to be WAY out of order. I apologize in advance but I am going to just jump straight to my personal highlight of the trip.

I was in Yellowstone with a group of 7 photographers and our amazing guide Wim. Everyone on the trip was hot for Bison and while numbers were down... there were plenty of healthy, well-fleshed and rather rambunctious Bison to go around. Personally... I wanted a coyote. 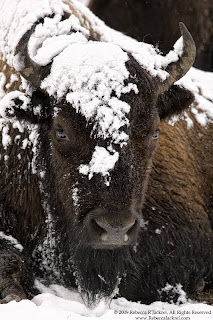 I love coyotes. I know a lot of people don't, they think of them as pests, thieves and nuisances... that maybe true when they are breaking into a hen house but my experiences have shown them to be quiet, mild mannered, playful survivors.

I heard Coyotes howling the first day of the trip in Lamar and counted at least 25... at a very far distance. As we were leaving a location I spotted one near the road and shouted out that we should stop.... oh the joys of being on a tour instead of by yourself... I was over-ruled with a "We'll see plenty more later in the trip". Nope. We saw 5 more later in the trip, each of them farther than the last... taunting me.

Our last morning we had two hours to photograph before we had to drive out of the interior to meet a bus in West Yellowstone. And once again... we stopped for Bison. I was half-heartedly shooting with my 500mm when I realized the scene really called for a shorter lens so as the remainder of the group continued hiking up the river bank, I headed back to the snow coach to pick up a shorter lens. I was chatting with Wim and taking my time getting my camera and lens set up when Wim jumped up and said "There, right there! Your coyote!". I lept from the snow coach and crept aroun 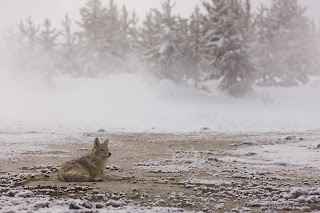 d the side and sure enough, walking right past the coach was a beautiful coyote. She paused and looked back at me as I rattled off shots and just as my memory card was full... she hopped off the road and headed up the hill into the thermal area. Wim helped me locate more memory cards and I bolted through the snow... ok... a slow lumber is probubly a better description of my movemements... you try running in 3 layers of thermals, heavy snow pants, a down jacket and Baffin snow boots and see how fast you can go! Luckily I was fast enough!

I was able to track her up the hill and into an area filled with mist from the thermals. She watched me briefly and dismissed me as a non-threat before settling down on a nice warm patch of ground. My only problem was I had a 300mm lens and it was hand-held! My 500mm on the tripod was sitting at the river's edge a long way away. I was certain that she would leave if I went back for it so I made the most of the moment with what I had. I was only able to signal one other person in the group so Bridgit and I had this beautiful girl all to ourselves for at least 30 minutes before the guys int eh group realized we weren't just photographing trees and maybe they shoul 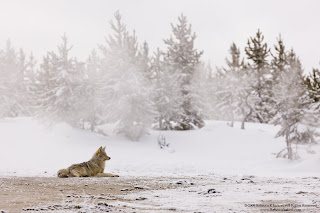 d check out what were we so intently focused on... The coyote stuck around long enough for everyone to get a few shots and then she stood, stretched and trotted off down the river.

Next year... I need to learn to cross country ski and get out there alone!
Posted by Rebecca Jackrel at 11:36 AM 1 comment:

Unfortunately my trusty laptop computer met it's end on the road... ok not literally "ON" the road but really, when it died I wanted to throw it out the window of the car and watch it disintegrate into a million tiny splinters of plastic...

I'll catch you all up on the remainder of the trip in the next few days... I need to download images galore but first... SLEEP!!
Posted by Rebecca Jackrel at 1:36 AM 2 comments: