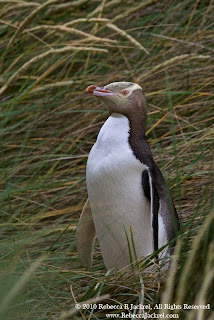 “Yellow-eyed aren’t like other penguins. They are scared to death of EVERYTHING!” our guide, Chris Roberts from ‘Back to Nature Tours’ tells us. It’s getting close to sunset and we are walking down a deserted beach on the Otago Peninsula in New Zealand. In the surf, I can see small heads popping up and scanning the beach for potential predators. At our height, we are included in the “scary-things” category and so we sit down in the sand to patiently wait and see if the penguins will be brave enough to come ashore. Shortly, we are rewarded for our patience by a beautiful penguin that makes his way out of the surf and up the beach. My first Yellow-eyed Penguin.

Yellow-eyed penguins (Megadyptes antipodes) are fairly large, competing with the Magellanic penguin for fourth place in the large penguin competition. Unlike the Magellanics who are very social, often walking from 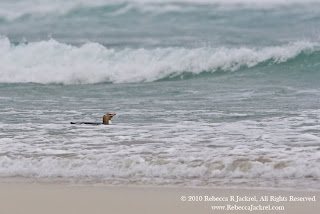 burrow to burrow to invite their neighbors to go for a swim, the Yellow-eyed are solitary. They approach the shore warily. Once on the beach they scan repeatedly for threats with their excellent eyesight before making a mad dash for the safety o 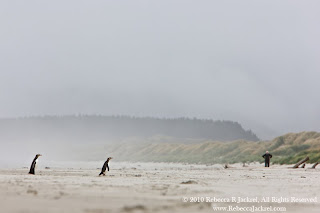 f the beach grasses where their young wait. When they encounter a human they run as if the hounds of hell themselves were upon them, often falling and madly flailing their flippers. It’s heart wrenching to see especially after working with other penguin species like the Gentoo who will snuggle against you if you just lay down near the colony or Rockhoppers who try to untie your shoe laces if you aren’t paying attention. Yellow-eyed’s just want to be left alone.

That doesn’t mean you can’t or shouldn’t try to see them! The penguins are a major tourist draw in New Zealand. Armed with a bit of knowledge you can have a viewing experience that doesn’t negatively affect these b 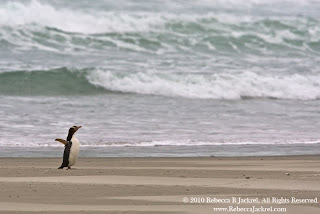 eautiful birds. There are several groups who have placed blinds, tunnels and huts for tourists to get up close without the penguins knowing it. If you do happen to find a penguin on a beach without a viewing blind, sit down immediately to lower your profile, keep your voices soft and low, avoid making quick gestures and wait for the penguin to move away at his own comfortable pace. Stay on existing trails around beaches and coastal woodlands to avoid surprising an unsuspecting penguin and leave your dogs at home.

Photos:
1. Yellow-eyed Penguin scanning the beach from the safety of the beach grass
2. Penguin in the surf looking for a spot to get on the beach
3. Penguins walking up the beach, they kept their eye on the person in the distance who was standing but barely gave us a glance as we lay in the sand quietly watching
4. First things first, a good stretch is in order after getting out of the ocean
Posted by Rebecca Jackrel at 2:45 PM No comments:

A major problem for people on the boats at Mavericks was sea sickness. It can strike anyone at anytime; young or old, fit or fat, male or female. Just because you've been in rough seas twenty times, doesn't mean the 21st time won't see you hung over the rear railing like a limp rag doll. Sea sickness is perhaps the worst feeling on the face of the earth... I've heard stories of people offering $5,000 to a boat captain to make him PLEASE head back to shore, people needing to be physically restrained to keep them from jumping ship and have witnessed first hand a friend huddled for 6 hours under a yellow tarp, begging us to feed him to the sharks at the Farallons. While not fool proof, this list has kept me lucky enough not to have been sick when many of my friends with equally strong stomachs have fallen.
Any other tips out there that have worked for you? Please share them!
Posted by Rebecca Jackrel at 12:39 AM No comments:

Nothing screams 'CALIFORNIA!!' quite so loudly as surfing. I've spent my fair share of mornings watching the surfers on Ocean Beach and Rodeo Cove, marveling at their patience as they bob in the ocean, waiting for that perfect wave. 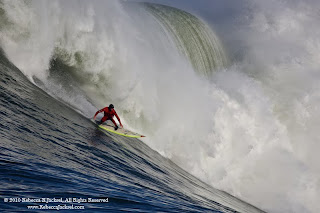 Once a year, when those perfect waves comes along, the top 24 big wave surfers in the world descend on the small town of Half Moon Bay for a heck of a wild ride. The Mavericks Surf Contest was first held in 1999 and a young man from Santa Cruz was crowned champion: Darryl "Flea" Virostko. Darryl went on to win in 2000 and 2004. 2005 went to Anthony Tashnick (Santa Cruz), 2006 to Grant Baker (South Africa), 2008 to Greg Long (San Clemente) and this year, 2010 Chris Bertish from South Africa took the top spot. 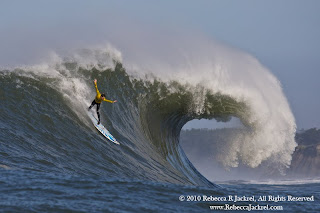 th no hope of a speedy enough return when the contest has been called or I waited the season only to find no suitable waves. This year they were sweet enough to call it in between trips and I found myself driving down highway 1 in the dark with two different sets of camera gear and my poor tired cousin in tow. I was fully prepared to climb the cliff with my 600mm and 2X teleconverter and hope for the best.

We arrived in Half Moon Bay and met up with a friend of mine, Jim Goldstein who tipped me off there might be room on one of the boats. Jim managed to score a spot on the media boat and was traveling light: two lenses, two camera bodies. Sure enough, I managed to get a spot on the Queen of Hearts. It might have been my imagination but she seemed a much less rolly ship than the Huli Cat but then again, EVERYTHING was rolling out there.

We saw a huge wave 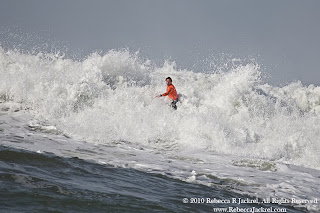 literally pick a guy off his jet ski and throw him into the water. I can only assume that was the wave that injured the people on the beach. It seemed to have a vengeful mind of it's own as it cut through the surf zone.

I had no idea what focal length would work best for the contest so I relied on my 100-400mm lens. Not the sharpest in my arsenal but you can't argue with the hand-holdability and flexibility a zoom can provide. I quickly abandon hope of being able to shoot with two cameras and stowed my second body in the main cabin for safety sake. One hand for the camera, one hand for the railing, or window, or desk.... or other passenger.... whatever is in reach when the boat gets knocked by a wave. The excellent light helped me keep my shutter speeds high enough to be able to shoot with less stability than I would think optimal and I captured many images that I am very pleased with.... not too shabby for a first timer. Next year I know what to expect and I'll be prepared! 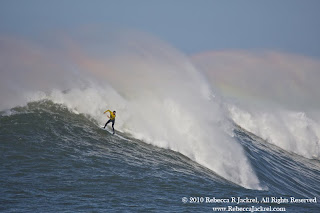 While Chris Bertish did pick up top honors... I couldn't help but follow Kenny "Skindog" Collins. I mean, the guy had rainbows following him! One thing is for certain, the ocean runs deep in these guys veins and they love being big wave surfers - it showed in every run they made. As for me.... I'll stick to being below the waves with my trusty regulator delivering me O2 whenever I need it. Scuba Tuesday tomorrow!

Outside my comfort zone 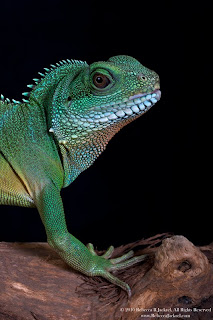 I firmly believe that pushing myself outside of my comfort zone makes me a better photographer. So while I love and prefer to work with cute and fuzzy birds and animals, I jumped at the chance to work with Michael Kern on some creepy crawlies owned by a private collector. 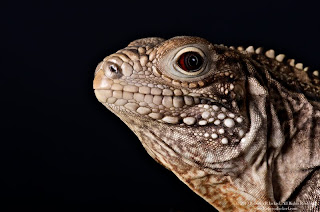 Michael has been seeing the beauty in snakes, reptiles, insects and amphibians for years and has a great book out called 'Serpents and Dragons: Finding Beauty in the Beast' which showcases a number of amazing species.

As it turns out, my recent move into human portraiture (another departure from my normal comfort zone) 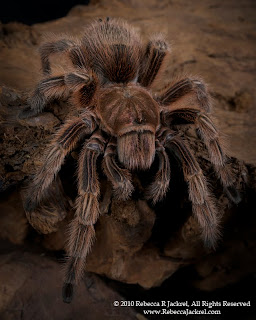 really helped me figure out the lighting. Being able to run that on instinct freed me up to focus on the personalities of the creatures in front of me... and oh yes! They do have personality!! One snake was shy, hidding his head and peeking up at us from under some mulch, the lizards pushed themselves up as if to say "Yes, I know I'm beautiful" and the geckos... well... who doesn't love geckos?? Very high on the cuteness scale.

Stay tuned if you'd like to get outside your comfort zone and work with some of these amazing creatures. The private collector is moving to a larger location where he will be able to offer photo sessions of his collection and Michael is thinking of running a few workshops in the new building to teach photographers how to bring out the beauty of these unique animals. Interested? Let us know! 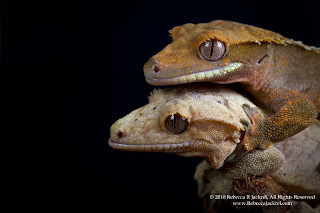