Hands Across the Sand

Looking for something to do tomorrow morning? Who will join me on Ocean Beach, SF (across from the Beach Chalet) at 10:30am to protest offshore drilling & advocate for clean energy?

"Hands Across the Sand is a movement made of people of all walks of life and crosses political affiliations. This movement is not about politics; it is about protection of our coastal economies, oceans, marine wildlife, and fishing industry. Let us share our knowledge, energies and passion for protecting all of the above from the devastating effects of oil drilling."

Posted by Rebecca Jackrel at 8:32 PM No comments: 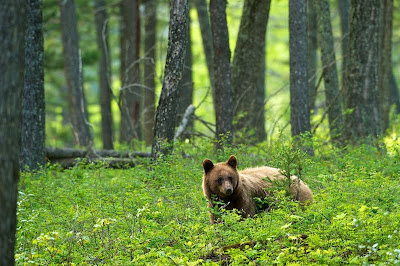 Bears capture our imagination. They look cute and fuzzy and harmless, meandering slowly through the woods. What people almost always forget is that they aren't harmless at all. What is it about people that makes them loose all common sense when they enter the forest?

I was in Waterton Lakes National Park on Friday (just across the border into Canada from Glacier National Park) when I spotted a beautiful grizzly poking through the forest. 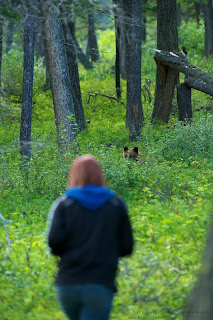 She stopped now and again to dig in the fallen trees, I assume looking for grubs, roots or seeds to munch on. She seemed pretty mellow so I decided to approach for a few photos. I wasn't the only one. A young girl (teenager) was VERY excited and ran ahead into the woods, making a racket and darting back and forth looking for a good vantage point to get a photograph. Her mother occasionally yelled at her to move back. Mom was apparently keeping an eye out for the mother bear to appear and would warn her daughter to run if there was any sign of the 'cubs' mother. I hated to break it to them but lucky for us, this bear was NOT a cub. Interior grizzly bears are much smaller than the coastal bears but I'd hazard to guess this was still around a 350 - 400 pound bear! Not even close to being a cub.

To the girls credit when I pointed out DON'T RUN! She stopped... she slowed down and moved with purpose and the bear immediately calmed and went back to foraging. A little while later we were joined by a grandfather with two young girls - approximately 6 & 9 years old. They did not stop running... I watched the bear, looking for signs of aggression. At one point she began to pop her jaw and stare straight at the teenage girl... that was about the time the girls mother had had enough and said "Get back in the car RIGHT NOW!"

A group of hikers appeared approximately 500 feet away. They had no idea the bear was there. 10 minutes earlier the bear had stood up, stared in the direction of the hikers, thoroughly sniffed the air and dismissed them as non-threatening. She knew they were there all along.

It's so easy for these animals to hide from humans. The forest is their home and most of the time - we never know the half of what is watching us in the woods. Since we are the interlopers it's OUR responsibility to know the rules for our own safety AND the bears.

A few tips:
If you encounter a bear:
Watch the behavior!
Remember: You are a guest in the bears home. Be respectful!
Posted by Rebecca Jackrel at 12:14 PM 2 comments: 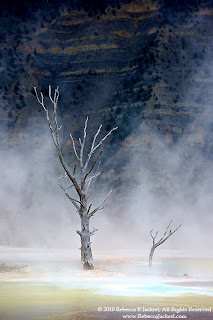 The Mammoth Hot Springs terraces make me think of ancient ruins dreamt up by H.P. Lovecraft. I half expect some alien creature to open an unseen door and step out of the terrace in front of me. On close inspection I realize I'm not that far off.

The terrace is formed by water heated from the hydrothermal features in the park interacting with limestone. As the hot water travels the Morris-Mammoth Fault it dissolves the limestone rock. As the water reaches the surface it begins to cool, releasing carbon dioxide and depositing the remaining calcium carbonate as travertine. Anything in the way becomes coated and eventually is consumed and integrated into the framework of the terrace.

So what are the alien creatures I alluded to earlier? Thermophiles - millions of them. These heat-loving microorganisms thrive in the hydrothermal features in Yellowstone National Park. Archaea live in the hottest waters, some plate-like, others spiral or rod shaped. The cooler waters are home to Sulfur-oxidizing filamentous bacteria. These bacterial colonies are responsible for the beautiful colors we see in the pools of water. The colors change based on the water temperatures, flow and the amount of sunlight.

So next time you find yourself peering deep into the colorful pools in Yellowstone,

remember, you are looking into the home and lives of millions of bacteria. Don't worry - this type of voyeurism is just fine!
Posted by Rebecca Jackrel at 3:05 PM No comments:

I've made it to Montana but the rain and subsequent dark has kept photography to a minimum. As soon as I have something to share I'll get it posted up here. Until then, I thought I'd mention an opportunity.

My friend Bruce Finocchio owns a ranch in Monterrey County that he has completely tricked out for bird blind photography. California Quail, Acorn Woodpecker, Wrentit, Blue Bird, Scrub Jay, California Towhee, Dark-eyed Junco, Nuthatch, Oak Titmouse... the list goes on and on... If you are interested he is now running workshops with Oliver Klink. You can sign up at: http://bit.ly/cIFkW9
Posted by Rebecca Jackrel at 11:47 AM No comments: