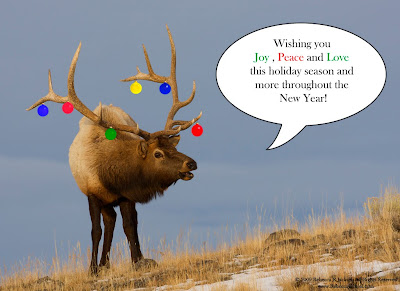 Posted by Rebecca Jackrel at 5:46 PM No comments:

Lighter side of Polar Bears

I put this video together to share with friends and family to give them a look at what I've been up to... I hope you enjoy!


A slightly larger version is available on YouTube now.
Posted by Rebecca Jackrel at 4:06 PM No comments:

If you listen to Stephen Colbert of the Colbert Report, you know that the number one threat to America is: BEARS! "God-less killing machines". Reading all the press these days generated by the increase in infanticide and cannibalism within the Western Hudson Bay population one might start to agree and have a negative image of these amazing creatures. It's important to understand that nature has a way of balancing things out. The loss of the cub has a far better long term return on investment than loosing the male or female bear to starvation.

It sounds cold and heartless, we all love baby animals but nature has to be heartless at times in order to survive. The cub that lost it's life helped that male bear get through an extremely difficult time. The mother is now able to better care for herself and she has the experience to prevent losing cubs in the future. Both the male and female will be in a better position to produce more off-spring because of the loss of the cub. It is sad and we grieve for that little life but we also thank it for helping those in need.

While hardly the same as the cubs sacrifice... I urge everyone to give a little bit of yourselves this holiday season. Times are tough for a lot of people. Foreclosures, homelessness, joblessness - people are just as scared as the bears, wondering when the ice will form, when the recession will end... Think about donating money or food to a local food bank. If you don't have any to spare, give your time. Help those around you to survive and be thankful knowing that others are willing to give of themselves in return.
Posted by Rebecca Jackrel at 11:34 AM No comments: 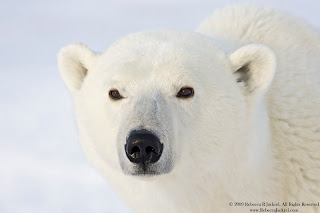 Finally some good news for the polar bears. The ice has formed on Hudson Bay and the temperatures are staying low enough to keep the ice so they are on their way!!

A big thank you to Polar Bears International for keeping us in the loop on the current conditions.
Posted by Rebecca Jackrel at 10:21 AM 1 comment: 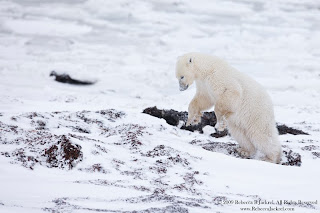 Nature is adaptable. If given time it can adjust, find new niches and new opportunities for survival. While rare, reports are coming in of Polar Bears eating Caribou, Lemmings and Ravens. As the polar ice melts, new species are becoming available as a food source. Harbor Seals are moving in to occupy the shores of Hudson Bay. Polar Bears are finding new sources of food and are being less finicky in what they eat... it's a good thing... right?

I have always assumed that Polar Bears are strict carnivores. All of the documents say that their main food source is the Ringed Seal. It made sense that they are opportunistic and will take advantage of any meal they can find but it didn't occur to me that they would only eat certain parts of the seal. In speaking with the naturalists and scientists associated with Polar Bears International (PBI), I learned that Polar Bears are lipovores. 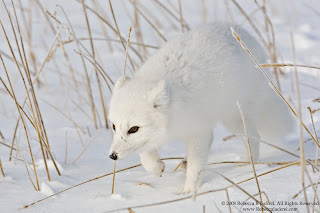 The Ringed Seal (Pusa hispida) utilizes a thick layer of blubber to keep it warm on the ice floes of the arctic. This fat layer is what the Polar Bear needs to build body mass for it's summer long fast. In most cases, the bear will not eat the meat! I thought they would eat every morsel, taking advantage of every opportunity. I was shocked but suddenly it made sense as to why the arctic fox would follow the bear onto the ice. Why hunt for your own food when all you need to do is wait for someone else to capture it for you?

As it turns out, Polar Bears, in addition to calories, obtain much of their water from the fat of the Ringed Seal. If the bear begins to eat protein they need to take in a higher amount of water from outside sources. Have you ever tried to get a cup of water from snow? Ten inches of fresh snow can contain as little as 0.10 inches of water! It takes 1 calorie to warm 1cc of water 1 degree centigrade. Since temperatures can get as low as -68 C... well... after a lot of math you can see it takes quite a bit of effort to get very little reward. 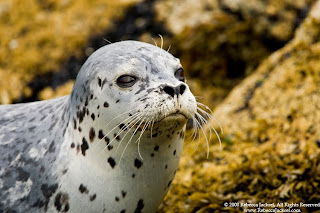 All of this is leading to more energy expenditure to receive a far smaller amount of benefit and in some cases, a negative benefit or at best no benefit at all. The Harbor Seal (Phoca vitulina) births on shore, not the ice so they have a thinner fat layer than the Ringed Seal. Have you ever seen a Lemming? Not much bigger than the hamster you had as a kid. And Caribou is exceptionally lean meat, great protein but not much water.

Moral of the story? It takes time to adapt, change is happening too quickly, we need to slow it down as much as we can to give these animals a fighting chance. Get involved.
Posted by Rebecca Jackrel at 7:52 AM 3 comments: