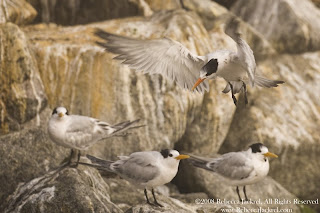 I spent the day co-leading a workshop in one of my favorite California shooting locations, Elkhorn Slough in Moss Landing with my friend Jim Goldstein. We kept our group small so that everyone had room to spread out and swing their longs lenses on the pontoon boat. Captain Yohn maneuvered us into just the right position for all of our shots and cut the engine often to keep the motor vibrations from affecting our images.

We were extremely fortunate to have a light layer of fog which lifted just enough to create a giant soft box effect. The lack of harsh shadows made it easy to get detail in even the darkest subjects like the Brandt's Cormorant. I love their deep blue eyes. 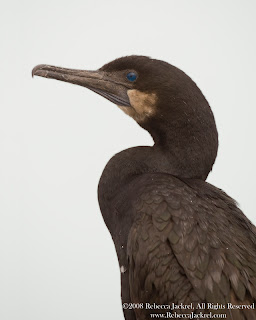 We were mainly after Sea Otters but I kept being distracted by the abundant birds. There is a large Elegant Tern colony on the end of the rock jetty and we practiced our flight shots with great glee. Three hours on the water passed by in a heart beat and before I knew it, I had several full memory cards and it was time to head home back to shore.

We'll be heading out there again for another workshop this winter with the hopes of capturing some newly born Sea Otter pups. There were a lot of amorous otters around so we are hoping for lots of young this year. Maybe you can join us!
Posted by Rebecca Jackrel at 2:39 PM No comments: